I Do Not Have Time to Read This Crap

This is one of my most pirated columns from INkwell Newswatch. I’ve found copied on dozens of other blogs. (I’m flattered, pirates, as long as you give me attribution.) I wrote it in May of 2005, when I was working for an indie publisher in the UK, now defunct, but the principles remain the same.

I Do Not Have Time to Read This Crap:

On my British editor’s desk is a rubber stamp that prints, in red ink, the words “I do not have time to read this crap.” Its blood-coloured imprint adorns several submission letters that lie scattered around his office. 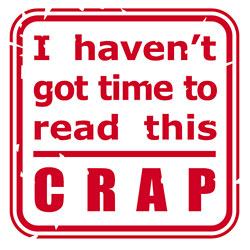 I feel sad for the rejected novelists, although of course their manuscripts were returned long ago with a polite rejection letter. So I asked him, and some of our other editors—how does a fiction submission avoid the dreaded red stamp and get a sympathetic read? Unfortunately, the sympathetic part seems fairly subjective—mostly based on personal tastes—but here are a few major mistakes that our editors say will propel your novel directly into the “crap” file.

1) Death threats in your cover letter

I’m not making this up. Editors get them. A query/cover letter is a business document—essentially a job application. It may accompany a one-page synopsis (the norm in the US these days) or a full manuscript (still accepted here at Shadowline.) But it is with that letter that your working relationship with your editor begins and—all too often—ends. Remember it should be short, professional and to the point. Say who you are, what you’ve written and why you’ve sent it to this particular publisher. Full stop.

My editor hopes to compile his collection of bad cover letters into a comedy script some day, so I mustn’t steal his thunder, but suffice it to say that threatening publishers with various forms of witchcraft and/or body mutilation if you are not immediately given an advance the size of the company’s annual budget will not get your novel published.

Although you may achieve immortality in an upcoming sketch on Radio Four.

Don’t try to run before you can walk. A person who’s just learned to lob a tennis ball over the net doesn’t expect to compete at Wimbledon, and someone who’s recently hammered her first nail doesn’t expect to be hired to build the next Trump Tower. But for some reason, writers believe that our very first attempt at novel writing is going to make a major publisher’s spring list.

This doesn’t happen. Fiction writing is a craft. Take classes. Read how-to books. Join a critique group. Go to workshops and conferences. Chances are, you shouldn’t send out your first novel. Keep it in a drawer and write a couple more. Some day you’ll thank me for telling you that. I personally learned this lesson the embarrassing way.

You need to know who’s publishing books like the one you’ve written, and where to find them in a bookstore. Film and TV references give you away as a non-reader. If you’ve written a forensic science whodunit, compare your sleuth to Kay Scarpetta: don’t just pitch your work as CSI: Peoria.

Specific genres have specific rules. Learn them. The only kind of fiction that can break rules is literary fiction, but if you prefer to read Grisham, don’t attempt the magical realism of Garcia Marquez or the kaleidoscopic character studies of Michael Cunningham.


If your novel is set on this planet, in its past or present, you can’t get away with made-up details.

Whether your book is a wildly creative vampire tale, a guaranteed three-hanky romance, or a Christian Rapture prophecy approved by George Bush himself, screaming anachronisms can keep your work in the slush pile forever.

If your story happens in ancient Rome, don’t dress your characters in silk, feed them spaghetti, or name them Beavus and Buttonius-Cranium, no matter how cool it sounds.


No editor is going to waste a minute of her overbooked time reading a whole novel written by somebody who can’t be bothered to use her computer’s spellcheck function. Or hasn’t found out where to put an apostrophe.

Get somebody to proofread for you. It’s hard to spot your own mistakes, because you know what you meant to say and your brain often sees the correct version instead of what’s on the page.

And, the editors remind me, never rely on spellcheck alone, or yule seam a compete full.