Building Atmosphere! The "Queen of Comedy" Dishes the Dirt on Creating Mood for your Masterpiece

I was tickled when the big city (Toronto) library sought me out to do a workshop for aspiring writers on "Building Atmosphere".

“Sure!” I said. “Are you paying me?” I said. (Although not necessarily in that order.)

They were, thankfully. And then the anxiety set in. (Cue the strident violins.)

Was I the best person to talk about this topic? My novels are primarily comedies. I usually aim for the funny bone, not the jugular. But then I recalled: most of my published short fiction is dark noir. And in short fiction, regardless of genres, you have to set the mood quickly.

Like many writers, I go from Comedy to Romance to Thriller to darkest Noir, happily skipping from genre to genre.

Genre-hopping authors like me (and there are many – you may be one yourself) set the mood cues quickly and dig in for the writing. Let’s look at how we do it.

Let’s start at the Beginning: What is Fiction?


The type of mood you wish to create begins with the type (or subgenre) of story you want to tell. So bear with me as we revisit the basics here:

In FICTION, we are telling a STORY.

A story has a beginning, a middle and an end.

Short stories, novellas and novels all have this in common:


THAT CREATES YOUR PLOT

Just as PLOT determines genre, genre will point you to the atmosphere you want to create in your stories.

But just what is that pesky thing called atmosphere, and why do we want it?

Atmosphere is about Emotion


In all the fiction we write, we are trying to create an emotion in the reader. Over and over, writers mess with the emotions of readers! That’s what we do.

Creating atmosphere is about setting the stage for your reader to feel something.

…your reader to imagine they can SEE the story happening

…maybe even that they are IN the story.

We want readers to feel they are right there, alongside your protagonist, experiencing the action themselves.

And wallowing in the emotion that you, as the writer, have planted.

Okay, get on with the details…


We create atmosphere through:


In each of these mini-sections, I’ll pick on a genre to illustrate the point.


1. Your Opening sets the Mood


Never fool the reader! The way your book opens tells them the sort of book they will expect to read.


Let’s look at some examples from the Masters:

Last night I dreamt I went to Manderley again. It seemed to me I stood by the iron gate leading to the drive, and for a while I could not enter, for the way was barred to me. There was a padlock and chain upon the gate.

From the opening paragraph, we feel the mood. Locked out! No Entry! You are not welcome here…

Now let’s look at Hitchhiker’s Guide to the Galaxy, by Douglas Adams (comedy: my fave)

Far out in the uncharted backwaters of the unfashionable end of the Western Spiral arm of the Galaxy lies a small unregarded yellow sun.

Orbiting this at a distance of roughly ninety-two million miles is an utterly insignificant little blue green planet whose ape-descended life forms are so amazingly primitive that they still think digital watches are a pretty neat idea.

No question here that we’re looking at something light and irreverent, maybe even satirical and silly. And, I personally think, brilliant (I agree!...Anne.) In any case, the mood is clear from the opening.


For this example, let’s go to the opposite end of Douglas Adams: Horror

In a horror story, I would want the atmosphere to be spine-tingling. I want you, the reader to feel apprehension, as you wait, wait, wait for something terrifying to happen.

Probably, I wouldn’t set this in a crowded cocktail party. Instead, I would look for a setting that makes one feel ‘alone’.


Couple this with weather, and you’ve created a mood without your characters even saying a word.

So let’s look at that other part of setting: weather.


In real life, weather affects my emotion, as it does for several people. Make that sun bright, and it’s easy for me to be cheerful. Cloud me over in grey, and the world changes.

Sun or no sun?

Maybe your story starts out that way. And then maybe the weather changes…thunderclouds start to build.

Does rain falls lightly or does Thor show his wrath by increasing the wind and releasing torrents of rain?

This effectively changes the mood of your story.

It increases the tension.

In my time-travel fantasy, Rowena and the Viking Warlord, I used thunderclouds to signal the impending battle.

We can see well in daylight.

At night, our vision is compromised.

This is an excellent way to create an atmosphere of unease…of fear or threat. Just the sort of emotion you want in a suspense story.

Humans are naturally daylight creatures. We hide in caves or houses when it is dark because predators roam at night.

One easy trick: when you move to the scary part of your story, move it to night. Make it moonless. Bring in the fog.

Sometimes, you might want to be an evil writer person, and fool the reader. Make something absolutely horrendous happen in bright daylight. Sucker the reader’s natural inclination to think they and their beloved protagonist are safe, and then pull the rug out from under both.

Make them feel shock. Because remember, that’s what we fiction writers do. We mess with the emotions of readers.


Using ALL your senses is important for creating atmosphere. We do pretty well with sight. Don’t forget the others.

Smell – ever walk into a seedy motel room? Give me that smell (musty, mildew, stuffy, smelling of sweat and stale liquor) and I’ll be there again in my mind.

Touch – A sticky menu tells us so much about the establishment. Ditto a spot on the floor that acts like glue to the sole of your heroine’s shoe. She continues to walk, and with every step, the shoe sticks to the floor…

Who hasn’t had that happen. What did you feel? Annoyance? Anger? Helplessness? Embarrassment? Maybe even the feeling of being trapped?

Yes, we can use ALL the senses to create atmosphere:

Sound –I am always surprised by how often writers forget to use sound to their advantage. Humans are predators, so it is natural for us to describe a setting with photographic detail, in that we are hard-wired to notice movement against it. But we are also instinctively alert to sounds.


These are stressful. They also signal class strata. Think of the brilliant movie Twelve Angry Men, and how they use the thundering sound of the El-Train (or is it L-Train?) to quickly place the murder in a tenement.


Grab these cues to build mood.

Example: you could signal a wonderful date going sour by your protagonist’s reaction to the food she tastes.

Many of my short stories are noir.

How to set atmosphere quickly, in Noir and thrillers:


Example: The opening from my flash fiction story, "July is Hell" (from Thirteen, An Anthology of Crime Stories)

I came back to the squad car with two coffees, both black.

Bill was fanning himself with yesterday’s newspaper. “It’s frigging middle of the night, for Crissake. How can it still be so hot?”

I shrugged. “July is hell. Always will be.” I passed him the cup of java.

“This job is hell,” Bill muttered, leaning back in the seat.


Everything in these opening sentences leads the reader to an atmosphere that is uncomfortable. The characters don’t just tell you that. The author SHOWS you. Bill is fanning himself. It’s night. Even the coffee is black. July is hell, and so is the job. This is not going to be a happy story, and you know it, after just a few lines.

Okay, not the final example. I also write comedy. Can’t help but end on a light note:

Example: The opening from my short story, "Cover Girl" (from World Enough and Crime Anthology)

The door opened, and a big man who was all chest and no hair strode in, barking orders.

“You found her,” I said. I find missing persons for a living. But I didn’t think he’d pay me for this one.


Totally different atmosphere created this time. Hopefully, by the end of this very short opening, the reader is smiling.

And hopefully, this scrivener has left you smiling, too.

Winner of 9 awards, including the 2014 Derringer and the 2014 Arthur Ellis (Canada) for The Goddaughter’s Revenge (Orca Books), Melodie has over 200 publications, including 100 comedy credits, 40 short stories, and seven novels.

She teaches "Crafting a Novel" at Sheridan College, and is the Executive Director of Crime Writers of Canada. You can find her at her website and on Facebook. Her Twitter handle is @MelodieCampbell

What about you, Scriveners? What's your favorite way to build atmosphere in your work? How do you feel when you read a book that has an atmosphere that seems to signal one genre and turns out to be another? Are you now trying to plot a horror story that starts at a crowded cocktail party?

Mob Goddaughter Gina Gallo stands to inherit two million bucks from Uncle Seb, a master forger. But there’s a catch: Seb wants Gina to make things right and return a valuable painting to the city art gallery. Reluctantly, Gina comes up with a plan for a reverse heist, but things never go as planned when her family is involved. 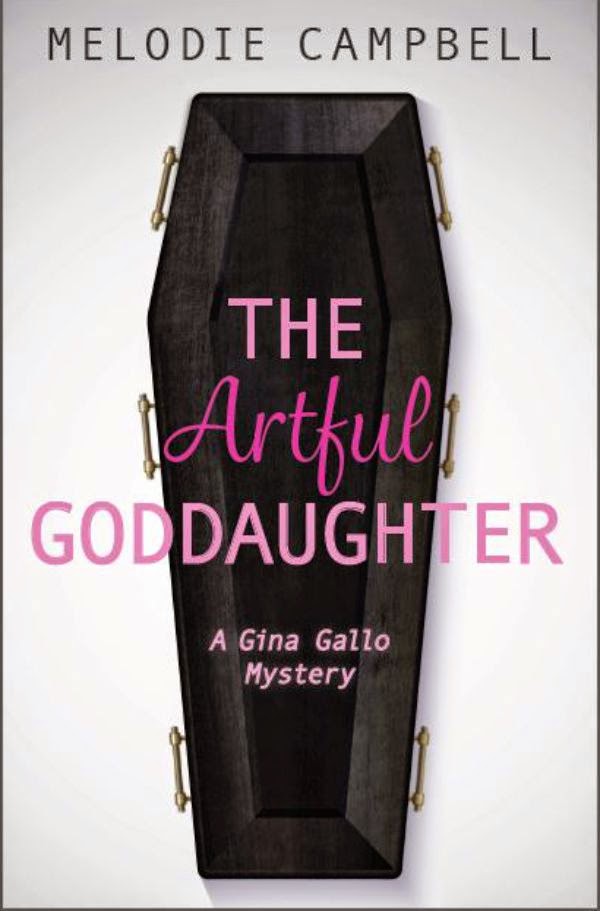 THE ARTFUL GODDAUGHTER is the third novel in the hilarious Derringer and Arthur Ellis award-winning series featuring Gina Gallo, who is having a hard time leaving the family business.

It's available at All the Amazons, KOBO and NOOK

Writer's Digest Writing Compeition. This is their biggie. First prize is $5000 plus your photo on the cover of Writer's Digest. Entry fees are a little pricey at $25 for a story, $15 for a poem but there are lots of big prizes. Categories for many genres of fiction, Creative nonfic, essays, screenplays, and poetry. Early Bird deadline May 4th.


The Vestal Review is looking for FLASH FICTION. Submissions are accepted February-May for the Vestal Review, the oldest journal devoted exclusively to flash fiction. 500 words or less. Humor is a plus. Pays $$ plus copies.

Chronicle Books Great Tumblr Book Search Do you have a Tumblr blog you think would make a good book? Here's the contest for you! Categories are ART, FOOD & DRINK and HUMOR. Deadline March 2nd.

Ruminate VanderMey Creative Nonfiction Prize Entry Fee: $20. A prize of $1,500 and publication in Ruminate is given annually for a work of creative nonfiction. Using the online submission system, submit an essay or short memoir of up to 5,500 words with an $20 entry fee, which includes a copy of the prize issue. Deadline: February 20, 2015

The Playboy College Fiction Contest Prize is $3000 plus publication in Playboy Magazine. You must be enrolled in college to be eligible. Stories up to 5000 words. Deadline February13th. $5 entry fee for non-subscribers.