Catherine Ryan Hyde on Rejection: Does Your Rejected Work Need a Rewrite?


Rejections. We all get them. In fact, there are only two things we can absolutely count on in the writing business: rejections and bad reviews.

There's no doubt rejections make us feel terrible. As Brian Doyle wrote in Portland Magazine and was quoted in Letters of Note, "To receive one is to instantly and all at once have one's hopes dashed, confidence thinned, and mood dampened."

They devastate us all, no matter where we are in our career. But we have to be careful not to let them derail our careers, or mess with a perfectly good manuscript.

We have to remember a rejection usually reflects only one person's opinion, which doesn't mean anything about its quality.

Think of it this way: if your work is strong enough to get a positive emotional response from one reader, it will trigger a negative response in another. People are different. No artist can please all of the people all of the time.

The truth is, any writer who hasn't received a rejection or a bad review is simply a beginner who hasn't tried to publish anything.

At the Central Coast Writers Conference in September, we all got a big wake-up call from a panel of highly successful screenwriters: it turns out novelists have it EASY. We only get rejected by agents and editors and the occasional reviewer. Screenwriters get rejected hourly—by the actors, the director, the producer, even the gaffer...and of course, the writer who's been brought in to "fix" your script. Everybody working on a picture is always asking for rewrites.

That helped us put things in perspective.

And the truth is the more successful authors are, the more rejections and bad reviews they'll have racked up. Superstar author Catherine Ryan Hyde has a ton. She's the author of  28 (and a half) books. She's had one made into a major motion picture, and she's hit the bestseller lists at the New York Times, USA Today, and Amazon. She's a true "hybrid" author who was published by the Big 5 for decades (S & S, Knopf, and Doubleday), then went indie, then landed in what might be the sweet spot in publishing today, Amazon imprints (Lake Union, Encore and Crossing.)

She's even been the #1 author on Amazon—knocking J.K. Rowling off her perch at #1 in the Cuckoo's Calling summer of 2013.

So when you want to find out what rejection really means, Catherine can give us the skinny. And it turns out it doesn't mean all that much.

I know so many good writers who decide they need to entirely rewrite their books after a few rejections, or they dump a story in a drawer and never look at it again because it failed to find a home or hook an agent after a few tries.

Some writers even keep their work buried in their files forever, saying they need to give it "one more polish" because they are so fearful of rejection.

But if you accept that rejection is part of the process, that it's totally subjective, and that you need to collect a whole lot of them before you'll get a "yes", you're much more likely to succeed

When Pay It Forward Was Rejected


This is one of my better rejection stories.

I'm not patting myself on the back here. I'm not suggesting that I just love the way I tell this story. It's more that I have a rating system for rejection stories. The more they completely redefine rejection, the better I like them.

So this is a good one, in my opinion.

This is the one about the agent—not just any agent but my agent at the time—who rejected Pay It Forward.

I was already under contract with her for Walter's Purple Heart, which she had sent out many times, to many rejections. I had already shown her Funerals for Horses (to which she responded, "I love this, but it doesn't work." I'd shed light on that comment if I had any). And now, contractually, I had to show her Pay It Forward when I finished writing it.

But I should mention that I had another agent at the time. Yes, another one. You see, technically, if my agent passes on a novel, I have a right to seek representation for it elsewhere. And I had been approached by a younger, newer, hungrier agent who had read one of my stories in a small literary magazine. (Take notice of this scriveners! You know how I'm always telling you to keep writing short stories? This might happen...Anne.)

Agent #2 was enthusiastic about representing me. Enough so to be willing to take on Funerals for Horses without first right of refusal on any of my other works. And Agent #1 confirmed, with only the slightest prickle in her tone, that so long as I was doing so with full disclosure, I did have that right.

What could possibly go wrong?

Ever heard it said that an author's relationship with an agent is something like a marriage? I always took it to mean that you plunge in thinking life will be beautiful from here on out and in less than a year you've deteriorated into arguing over who has to take out the trash.

To the extent that having an agent is something like having a spouse, having two agents is a bit like bigamy. You spend a lot of time telling one or the other that she is the only one you truly love, that the other agent means nothing to you. (It was one book. It meant nothing.) As my relationship with Agent #1 began to fray, I could always make Agent #2 laugh by saying, "My other agent doesn't understand me."

Of course, I wanted to give Pay It Forward to my agent who understood me. But I couldn't. She didn't have the "first right of refusal" contract.

I mailed the manuscript to Agent #1 and waited. She called me and left a message. It said, "We need to talk."

Have you ever noticed that after people say, "We need to talk," they never go on to share any good news? Ever? I've noticed that. And I thought maybe you had, too.

I wish she had sent me this in a letter. I would have saved it. And we'd have a merry little laugh over it now.

Short version: she hated it.

She asked me why all the people in it had to be "so awful." I told her I didn’t think Trevor, Reuben and Arlene were awful. She admitted that perhaps awful was the wrong word, but noted that everybody had something wrong with them. They all had problems. (Unlike life, I was thinking, where nobody ever has any issues.) She asked me why nice people couldn't pay it forward to other nice people. (Should I even comment? No. Too easy.)

I asked her to send it, and Walter's Purple Heart, back home to me. And I gave them to Agent #2, who had never sold anybody's first fiction. She went on to make me her first. She and her partner-husband sold my first five novels and three movie deals—including selling Pay It Forward to Simon & Schuster and Warner Brothers films—without revision.

Next time you get a rejection, picture the manuscript of Pay It Forward gathering dust in one of my desk drawers. And assume that the next person you ask may offer a wildly different opinion.


What about you, scriveners? Have you let rejection get you down? Do you rush to revise your book every time somebody rejects it or tells you it needs to be "fixed"? Are you hiding work in your files because it got rejected a few times? How do you deal with rejection?

Many thanks to Catherine for holding down the fort while I recover from dental implant surgery. For more on rejection from an editor's point of view, see Ruth Harris's post 10 REAL Reasons Your Book Was Rejected.

You can find me on Louise Wise's Wise Words this week. You can read an excerpt from So Much for Buckingham. It's Camilla Mystery #5, in which the Manners Doctor forgets her manners and responds to an Amazon review of her etiquette guide. Mayhem and murder (and hilarity) ensue.

And don't forget that by next week we should be moved to our new WordPress blog. Keep your fingers crossed. If you subscribe, the blog you get in your inbox should be from the new site. If you follow by rss feed, you may have to click through from this one...Anne

HOW TO BE A WRITER IN THE E-AGE: A SELF-HELP GUIDE
by Anne R. Allen and #1 bestseller Catherine Ryan Hyde 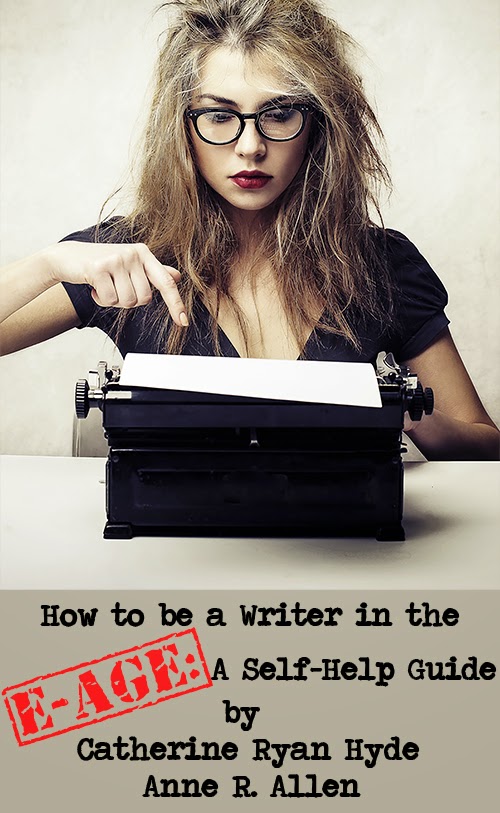 Not just for indies, and not just for authors going the traditional route. This is the book that helps you choose what path is right for YOU.
Plus there's lots of insider information on using social media and dealing with critiques, bullies, trolls, and rejection.


Amazon's Little A Poetry Contest. This is a brand new thing. NO FEE The contest will be judged by poets Cornelius Eady, Jericho Brown and Kimiko Hahn. The winner will receive $5,000 in prize money and a publishing contract featuring a $2,000 advance with Little A, Amazon Publishing's literary imprint. Poets who have published no more than one book of poetry can submit their full-length collections for consideration to LittleAPoetry@amazon.com. Deadline Dec 20th 2015

The Poisoned Pencil: New YA publisher open to submissions! The well-known mystery publisher The Poisoned Pen now has a YA imprint. They accept unagented manuscripts and offer an advance of $1000. Submit through their website submissions manager. Response time is 4-6 weeks.

Open call for the Independent Women Anthology: short stories (flash fiction included), poetry, essays, artwork, or any other woman and/or feminist-centered creative work. 10,000 word max. All genres but explicit erotica. $100 per short story, $50 for flash, poetry, and photography/artwork. All profits will be donated to the Pixel Project Charity to end Violence Against Women. Deadline January 31, 2016 with a goal of publication on International Women's Day, March 8, 2016.

SCHLAFLY BEER MICRO-BREW MICRO-FICTION CONTEST $10-$20 ENTRY FEE. Fee includes a subscription to River Styx literary magazine or one issue depending on amount of entry fee paid. Submit up to three stories of 500 words or less each. All stories will be considered for publication. $1,500 first prize plus one case of micro-brewed Schlafly Beer. Deadline January 1, 2016.

The Writer Short Story Contest judged by Literary star Colum McCann. You can have your work read by the acclaimed author of Let the Great World Spin. $25 entry fee. Write a 2,000-word short story responding to one or both of the quotes below by Mr. McCann: "There is always room for at least two truths." or "With all respects to heaven, I like it here." Deadline December 6th

HAMLIN GARLAND AWARD FOR THE SHORT STORY $20 ENTRY FEE. $2,000 and publication to the top unpublished story on any theme. One story per entry, multiple entries acceptable. Maximum 7,000 words. All entrants will be considered for publication. Deadline December 1.

Labels: Agent rejection, Anne R. Allen, Catherine Ryan Hyde, coping with rejection, How to Be a Writer in the E-Age, Pay it Forward, rejection, What rejection means