How to Turn "Real Life" into Bestselling Fiction...and a Word about Memoirs


Writing a novel based on the lives of real people is much more than simply recounting their story—even if it’s a whizz-bang, humdinger of a story.

The challenge is turning real people and real events into fiction.

Having no guidelines at the time I wrote Decades, I figured it out as I went along. I made plenty of mistakes along the way but had several advantages even I wasn’t aware of.


It’s basic but bears repeating: learn the nuts and bolts of creating compelling fiction. Decades was my first “big book,” but prior to writing it, I had been writing professionally for over ten years—free-lance blurb writing, articles for men’s adventure magazines and for women’s magazines. I also wrote original paperbacks, mostly Gothic romance and romantic suspense, under a variety of pseudonyms.

In the process—and hardly intending to—I learned how to write action, emotion, and sex, how to grab a reader from the first sentence and how to create a cliffhanger. That knowledge of the craft would be the invaluable underpinning of the novel.


Real life—and coincidence—provided me with the initial spark for what would become the story of an extra-marital affair and a marriage in crisis. The coincidence was that I happened, quite by accident, to know each of the three people involved, two much better than the third.

The three were: a successful but restless husband, the shy, insecure, rich girl he marries on his way up, and a fashion editor who becomes “the other woman.” Two of them confided “their” versions, giving me two different points of view and invaluable perspective.

None of them knew—nor did I at the time—that years later, haunted by their story, I would turn their dramas into fiction.

3) Beware the “it really happened” trap.


In writing a novel based on real life, I faced the same challenges a writer does with any novel—the need to create believable characters and a dramatic plot—with the added twist of having to structure the formlessness and irresolution of everyday life into the demands of a novel.

Knowing the “real people” turned out to be both a blessing and a hurdle, a limitation and a spring board. I found that the real events that seemed so compelling when told to me often either fell flat in fiction or else were quite literally unbelievable.

The incidents and encounters I invented served the demands of a novel much better.


Of course I changed names but, as I began to write, I realized I had to go further and change initials, too. It wasn’t enough to change John Doe into Jack Dawson. The initials “JD” kept triggering unwanted memories of the real person and interfering with the creation of a believable fictional character.

A radical name change—to Mark Saint Clair, for example—guaranteed JD’s privacy and, from a writer’s point of view, had the secondary effect of freeing me from any reminders of the real John Doe/Jack Dawson.

The liberating consequence was that I felt free to change the husband’s ethnicity, physical appearance, the details of his childhood, and entirely fictional military and educational experience. I made him taller, handsomer and more successful than he really was, changed his profession, and invented a fictionally significant relationship with his daughter.


The fashion editor was a stylish Manhattan single woman who led a hectic, quite glam social life. In the novel, I wanted a character more representative of everyday experience so fun and gossipy fashion-world details went mano a mano with the delete button and lost.

Instead, I portrayed a woman more characteristic of her times who marries young, has two kids, goes thru a drab, depressed, is-this-all-there-is? period. She divorces the husband who was her college boy friend and, as opportunities for women opened up in the late 1950s and early 1960s, learns (the hard way) how to conduct herself in a challenging and competitive business world.

Each of the other characters received a similar makeover. I invented parents for the fictional wife, created a sexual history for her emblematic of post-World War II cultural attitudes, and gave her a talent even she didn’t recognize—a talent that, in the end, rescues her.


The events took place mainly in Manhattan but, as my draft took shape, I realized the setting was too limited and that I needed to give my characters breathing room.

The characters in Decades do live in Manhattan, but I added important scenes set in Florida, Nantucket, and the Caribbean.


Almost any “real life” story by its nature, tends to be limited to the people directly involved and their immediate circle. (Unless your story is about someone you know who happens to be President of the United States whose actions have global consequences.)

As I drafted the novel and its plot and characters took shape, I wanted to show how the consequences of what started out as a casual affair between consenting adults affected people not directly involved.

I ultimately created a teen-aged daughter torn between her charming, straying father, her loyal, devastated mother, and the come-hither lure of contemporary culture, in this case, the go-go Sixties.


The final element that transformed real life into fiction occurred to me as I was halfway through an early draft and paused to write what passed for an outline to the end (outlines aren’t exactly my strong suit!).

I realized that the age difference between the married couple, the younger “other woman,” and the teen-aged daughter led naturally to portraits of three transformational, mid-20th Century decades. That realization gave me a theme that supported the fiction—and the title.

By the time I was finished with my makeovers, plot twists, and search for a more substantial framework for the story, the characters had taken on their own, living, breathing albeit fictional lives. The plot moved with its own energy to a far different conclusion from the one in real life, and I was able to portray massive cultural and social changes that readers could relate to in an entertaining and story-appropriate way.

I certainly didn’t plan any of it in advance. All I knew when I began was that life had handed me a fascinating story. The false starts, tough decisions, and dead ends ultimately led to an international bestseller that explored dramatic personal dynamics set against an era of tumultuous social and cultural change, the repercussions of which we still feel today.

Wasn’t easy but definitely worth it.


A few words about writing a memoir.


Unlike fiction in which the reader has no expectation of a “true story,” the memoir promises the opposite: an approximation of real life. The decisions the writer of a memoir must make come down to "how much do I want to reveal" and, considering the vagaries of memory, "how far can I deviate from the truth?"

Jane Friedman addresses some questions memoirists must answer in How True and Factual Does Your Memoir Have to Be?

If you want to tell your own story but are undecided about whether to present it as a memoir or a novel, Leslie Lehr lays out the advantages of each.

Dana Sitar, author of This Artists’ Life, details seven mistakes to avoid when writing a memoir.

My DH, Michael Harris, required fifty years to write his bestselling memoir, The Atomic Times, about his experiences as a young soldier assigned to “observe” the US H-bomb tests. In an interview on this blog, he explains what took so long and discusses the importance of voice, perspective, and POV.

What about you, Scriveners? Have you tried to write fiction based on real characters and situations? How did it work for you? Have you been thinking of writing a memoir and wondered how much you could bend the truth? Have you found you got hung up in "the way it really happened?"


BOOK OF THE WEEK


DECADES: 2014 edition revised by the author for today's reader.


"The songs we sang, the clothes we wore, the way we made love. Absolutely perfect!" ...Publisher's Weekly 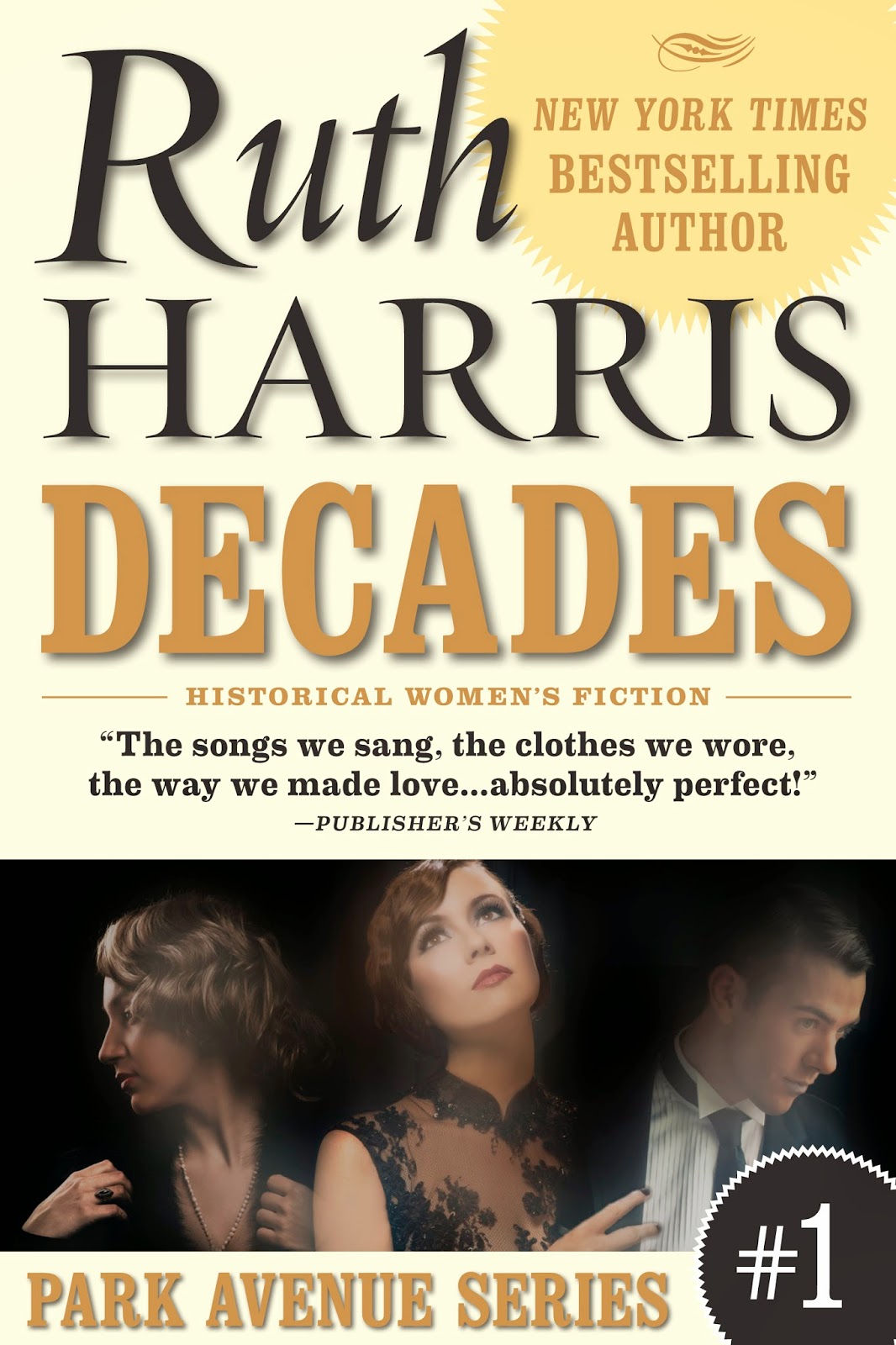 THREE WOMEN. THREE DECADES. Spanning the years from the optimistic post-War 1940s to the Mad Men 1950s and rule-breaking "Make Love, Not War" 1960s, DECADES is about three generations of women who must confront the radical changes and upended expectations of the turbulent decades in which they lived.

Evelyn, talented but insecure, is a traditional woman of the Forties. She is a loyal and loving wife and mother whose marriage and family mean everything to her.

Nick, handsome and ambitious, a chameleon who changes with the changing times, is her successful but restless husband.

Joy, their daughter, confused and defiant, a child of the Sixties, needs them both but is torn between them.

Barbara is the other woman, younger than Evelyn, accomplished but alone. She is a transitional woman of the Fifties who wonders if she can have everything--including another woman's husband.

DECADES, sweeping in scope yet intimate in detail, is the emotional, compelling story of family, marriage, crisis, betrayal and healing.

Writers’ Village International Short Fiction Contest:  $24 entry fee. Prizes of $1600, $800, $400 and $80. A further ten Highly Commended entrants will receive a free entry in the next round. Professional feedback provided for all entries! Any genre: up to 3000 words. Deadline December 31st.

SCHNEIDER FAMILY BOOK AWARDS: NO ENTRY FEE. These awards honor an author or illustrator for a book that embodies an artistic expression of the disability experience for child and adolescent audiences. Three awards of $5000 each will be given annually in each of the following categories: birth through grade school (age 0-10), middle school (age 11-13) and teens (age 13-18). May be fiction, biography, or other form of nonfiction. Deadline December 1, 2014.

JANE LUMLEY PRIZE FOR EMERGING WRITERS NO ENTRY FEE.  The Prize is awarded annually to a writer who has not published a full length book of poetry or prose. This year is poetry. The winner will receive a prize of $300 and will be featured in Issue 6 of the Hermeneutic Chaos Literary Journal. Deadline November 30th.

to be published in January 2015. Publication will also be awarded to the first two semi-finalists. In addition, all the entries will be considered for publication. Deadline November 30

MUSEUM OF WORDS MICRO FICTION CONTEST: NO ENTRY FEE. The competition is for very short fiction pieces of up to a maximum of 100 words. The winner will receive a prize of $20,000, with three runners-up each receiving $2,000. This contest is open to writers from all countries and entries are accepted in four languages: English, Spanish, Arabic and Hebrew. All stories entered must be original and unpublished. The last Museum of Words contest attracted 22,571 entries from writers in 119 countries. Deadline November 23, 2014.