Style That Doesn't go out of Fashion: Style Sheets, Style Guides, and Why Audrey Hepburn Style is a Writer’s Best Friend


Look, guys, I don't want to freak you out but, if you're writing a book (or a short story or a novella), you need a style sheet.

In case you don't know what a style sheet is and maybe have never even heard of one, a style sheet is a list of all the important data—names, addresses, dates, people and places—in your manuscript. Creating a style sheet is straightforward: the first time a character or place name (or any other data) is mentioned, add it to a list. That list is your style sheet. Simple as that.

Your style sheet is a road map to your book, a quality-control tool that provides coherence and consistency.

Analogous to continuity in a movie, your style sheet will ensure, among other things, that your characters don't suddenly change names, marital status or political affiliation—or worse—in the middle of your novel. Trust me, it happens.

Like this: Your MC is James Q. Black. You don't want him to suddenly to become Jimmy Z. Brown and confuse the hell out of your reader or the agent or editor you're trying to sell. Because, guess what?, the reader will get confused and give up or you won't make the sale. A style sheet will save you from the vagaries of memory—and from yourself.

Character descriptions that ensure a blonde is blonde (unless a change in hair color is critical to the plot) can also be included in your style sheet. A six foot tall zombie is six feet, not five six. A scar on the right side of your gunslinger's face stays on the right side, doesn't wander over to the left or completely disappear (at least not without a credible explanation).


Well, yeah, although IRL sometimes there is overlap. Generally speaking, though, a style sheet keeps track of the nuts and bolts: 21 Main Street not twenty-one Main Street or 22 Maine Street, remember?

A style guide, OTOH, offer suggestions about how to write. Some publishers provide a style guide, a sort of house rules for writers.

To get started, acquaint yourself with a few tried and tested classics.

Just remember, rules and style guides are suggestions, not iron-clad laws. Once you know them and use them confidently, you can (maybe) break them as long as you know what you're doing.

Audrey Hepburn style and why it matters.


What did Audrey do that no one else did—or could do? She looked like herself. On purpose. Period.

Style icons don't look like anyone else, they look like themselves and no one else. They do not follow trends, they set them. They are not fashion victims but style leaders.

They are unique and instantly identifiable. They don't fear owning their own wavy/frizzy/stick straight hair, scrawny/fleshy/muscular body, big nose/thick lips/long chin. They understand that the key to standing out is to work with what they have and to be the best version of themselves. On purpose.

What does style and looking like yourself on purpose have to do with writing and selling books?

In the tsunami/avalanche/crap ton of books being published and a flattening market as noted in a recent post by Porter Anderson, the big question is: how can your book stand out?

Style is how. Style is not fashion and style is not some fad that's here today, gone tomorrow. Style is enduring, unique, recognizable, desirable and, most of all, authentic. For a writer, style is writing like yourself. On purpose.

Finding your own style isn't quick and it isn't easy. Which doesn't mean it's impossible. Or, even worse, no fun.

Stephen King has an answer to the question of why developing a style of your own can be difficult: "Good writing is often about letting go of fear and affectation."

When you write, are you afraid of what critics/your Mom/a reviewer/your crit group will say? Do you feel pressured to prove to the world how smart you are and how brilliant your prose? Do you want to impress a Paris Review critic or your high school English teacher?

Do you shrink from ideas that seem too far out/too freaky/too scary/too ordinary/too done-to-death? You know what I mean: boy meets girl, boy loses girl, boy gets girl. You don't want to write that. Not again.

And you do know, don't you, there there are maybe 7 basic plots?

Are you holding yourself back from developing a unique style because you're afraid? Of what? Of the nay-saying phantoms in your head? Of what "people" will say? Do you cringe from imagined hostile reviews?

Is your writing suffering because you're afraid of what people you don't even know much less care about are going to think?

Does the thought of a one-star review send you to the shrink?

Now you're beginning to see what I'm getting at, aren't you?

But, you say, if I let go, if I indulge my nuttiest, weirdest, furthest-out or done-a-million-times idea, people will laugh at me, sneer at me, think I'm crazy, call me untalented.

The fact is, you're right. Only a few examples needed to make the point:

How do you develop a style of your own?

The obvious answer is that a writer must face his or her fears. Booze is popular. So is chocolate. But, honestly, don't both seem a bit passé in this time of organic, grass fed, artisanal, gluten-free Everything?

The advice of an in-demand sports psychologist gave me an idea for a different approach. Why not accentuate the positive? Why not conquer fear with confidence?

The psychologist's theory is that if a golfer is a good putter, s/he should practice putting until s/he becomes a superb putter? This expert's approach was not to focus on correcting an athlete's weaknesses, but on polishing his/her strengths.

Writers can take the same approach: write what you're good at. To bring the end of this post back to the beginning, as you polish what you're already do well—narrative, dialogue, characterization, humor, horror, thrills, romance—you'll will inevitably hone and define a style. It will be as individual as a fingerprint, as recognizable as Streisand, Tilda or Audrey and you will develop it by doing what you like best—and by practicing what you're already good at.

Simple, yet not so simple, and, yet, eminently do-able.

Plus, like many of the best things in life, style is FREE.

What about you, Scriveners? Do you have a distinctive style? Did you experiment with several before you came up with one that's really "you"? Have you ever changed a character's name and forgotten to go back and change it? (I once sent a partial to an agent where the heroine's name changed halfway through. Ack!)...Anne

When it comes to style, you can't beat Chanel. Read The Chanel Caper by Ruth Harris for only $2.99 on all the Amazons 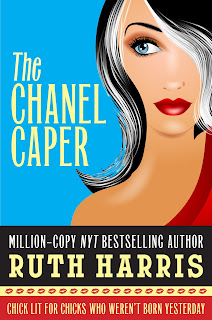 
"The Chanel Caper is a romantic comedy, a thriller, and a send-up of the big city lifestyle in the wake of the global financial crisis. All the disparate elements of this very funny story are tethered by the engaging Blake, a smart, sensible, and dryly witty heroine intent on saving her marriage. It's definitely a romance for the grownups, set against the backdrop of the bright lights of the city that never sleeps."

The IWSG Short Story Anthology Contest 2015.  NO FEE! The top ten stories will be published in an anthology. (Authors will receive royalties on sales.) Eligibility: Any member of the Insecure Writer's Support Group is encouraged to enter – blogging or Facebook member (no fee to join the IWSG). The story must be previously unpublished. Entry is free. Word count: 5000-6000. Theme: Alternate History/Parallel Universe. Deadline: November 1st