10 Misconceptions a College Education Taught Me about Writing


I had what is known as a "good education." I attended East Coast and European prep schools and Ivy League colleges. Both my parents were college professors with PhDs in literature.

All of which left me uniquely unqualified for my chosen profession: writing novels.

Because I grew up knowing almost nothing about what kind of writing actually sells.

One of my favorite funny moments in film is the scene in Star Trek IV, when the Enterprise crew find themselves back the 20th century. Kirk refers to "the complete works of Jacqueline Susann, the novels of Harold Robbins," and Spock replies, "Ah... The giants!"

Hilarious bit. But the thing is—they were giants. Not great writers, but great storytellers. They provided the stories people of their era were eager to read—the same way Shakespeare, Jane Austen, and Dickens did.

WH-A-A-A-T!!? I can hear the English majors screaming now—"You dare to compare Susann and Robbins with great literary writers?"

Well, yeah. Because Shakespeare, Austen, and Dickens didn't set out to be "great literary writers." They set out to make money writing what the public wanted—just like Susann and Robbins.

Hey, I'm an English major myself (technically Art History, but I spent enough time studying literature to qualify.) I could compare and contrast the use of nature imagery in the Cavalier Poets before I'd ever read a Harlequin romance.

But looking back, I realize I should have given the Harlequins more notice. Reading nothing but classic literature gives you a false idea of what people actually read.

It also teaches a cerebral rather than visceral approach to writing—plus it gives us a pretty distorted idea of the typical author's life.

Here are some things I learned in academia that worked against me in the real publishing world.
1) Genres? We don't need no stinking genres!

I've spent most of my writing life "trampling across every accepted boundary of fiction category with joyful abandon," as my UK editor once put it.

Which made my work almost impossible to sell.

The truth: Most successful writers get in through the genre door. Even literary authors. Kurt Vonnegut wrote SciFi; Margaret Atwood writes women's fiction and SciFi; Dennis Lehane and Kate Atkinson write mysteries. Very few purely literary novels sell—and most of those are by authors who have published scores of exquisitely crafted short fiction pieces in prestigious journals and/or have endowed chairs at major universities.

We need to choose a genre and write as creatively as possible within its boundaries. Otherwise, no matter how brilliant we are, we can stay unread forever.

Even self-publishers have to learn to categorize themselves or get lost in the Amazon jungle.


Oh, yes, we loved those classes where we discussed the theme of the eroding American Dream in Fitzgerald, and the decay of the South in Faulkner. They set off fantasies of the novels we were going to write about the demonization of the feminine and the need for adolescent rebellion.

The first novel I wrote showed the darkness and corruption underlying the "happy days" of the 1950s.

I sometimes even stressed the theme in my query letters.

Yeah. For some reason, agents weren't all that impressed.

The truth: It turns out not many people outside of a literature class actually care about themes. What most readers care about is story. Themes are something you kind of sneak in, just for yourself.

If you want future English majors to ferret out your themes a hundred years from now, you have to actually sell the book now.

And if you're self-publishing, it's very tough to sell literary fiction. Most ebook buyers—and ebooks are where the money is—are looking for fast, skimmable stories, not rich, weighty prose. And even the loftiest of publishing houses won't take on anything they don't think can make money.

3) Readers are sure to be impressed by your vast knowledge of literature.


If you spent your college years immersed in the classics, you probably long to drop lovely Shakespearean quotes into your descriptions and make clever references to the works of Lord Byron in your sparkling dialogue. That's sure to let your readers know they're in the capable hands of a culturally literate author, right?

The truth: Um, not really. That quote from Aphra Behn's Oroonoko may impress your former Restoration Lit professor, but not many others will have a clue what you're talking about.

I used to state proudly in my query letter that my first Camilla novel, The Best Revenge was inspired by Mrs. Fanny Burney's 1796 novel, Camilla, or a Picture of Youth.

How many requests for partials came out of those queries?

4) Use topic sentences; never use fragments; semicolons are our friends.


I was the ultimate grammar nerd. I prided myself on my ability to diagram any sentence, and got a perfect 800 score on my English SAT. I had what it takes to be a great writer—right?

Nope. My editor at a Canadian ezine clued me in. "This stuff reads like a Ph.D. dissertation," he said. "Your paragraphs are indigestible hunks of text, and for god's sake break up those sentences!"

The truth: Strict adherence to the MLA rules required for college papers comes across as stilted and boring in fiction or narrative nonfiction. Some people even find it a little hostile.


5) Great writers like Gertrude Stein, Joyce, and Kerouac did cleverclevercleverthings with punctuation and syntax, so people will think you're clever if you do it too.


Oh, I had to get into that experimental writing thing. I wrote one novel as a series of diary entries by a 10 year old, complete with childish spelling and grammar.

That one got rejections in the return mail.

The truth: Hard to read is hard to sell.

Gertrude Stein gave great parties (and her wife baked killer brownies) which fueled her fame more than her books. Joyce's books were reputed to be, ahem, dirty (never underestimate the power of banning books to stimulate sales.) And Kerouac tantalized the Mad Men era with tales of the non-conformist life they were starved for.

I'm not saying these writers aren't great, but experimental writers usually need other factors beyond their actual writing to get them into the public eye.

This is especially true for self-published writers who depend on Amazon's Kindle store for most of their sales. Amazon flags books that have anything their robots consider "misspellings" and "grammar mistakes" and takes them down if they are not rewritten in what their spell checker software considers standard English. (Yes, I consider this unfortunate, and I think it will have a far-reaching negative impact on our literature. But for some reason, Amazon doesn't come to me for advice. :-) )

Update on Amazon and typos: John Doppler at Words on Words says Amazon isn't being as draconian about creative spelling as was reported in the Good E-Reader. They only flag books if they've had complaints.


I loved to labor over a paragraph, or even a phrase, until I got the music of it exactly right. It could take me six months to write a chapter. Each one had to be like a painting of visual delights.

But I'd never actually finish the story. I still have boxes filled with those unfinished "masterpieces."

The truth: Most book buyers aren't looking for show-offy prose. They want to be entertained.

I once spent two weeks on a Greek island with nothing to read but Henry James' The Golden Bowl. This cured me of pretending I actually liked James. (Okay, Portrait of a Lady is pretty good, but it's way too long. A little less description would make it a lot more readable.)

7) You can't go wrong if you follow the masters.


Prologues, omniscient POV, weather report openings—literature is full of stuff publishers tell you not to do. If Dickens or Faulkner did it, how can it be wrong?

When I was first out of college, I wrote lots of faux Vonnegut. Plus some very bad imitations of Dorothy Parker. Then I fell in love with prologues. I wrote long, endless ones, detailing the backstory of all my characters and their ancestors. Luckily, I never got around to writing the actual books.


8) Just be honest and authentic and "tell your truth," and you'll be a success.

Unless your work also tells a great story with universal appeal, nobody cares.

9) Writers' lives are important and interesting.


You spent all those class hours studying every detail of Emily Dickinson's existence, every nuance of Scott and Zelda's correspondence, and endlessly pondering why Virginia Woolf took that walk into the River Ouse. So you're sure that if you get published, people will be interested in your life too.

The truth: If you say you're a writer, most people will...

2) Ask directions to the bathroom3) Tell you their life story and offer to go 50-50 with you on the book if you "just write down the words."


OK, I confess I read way too much Hemingway and Fitzgerald.

The truth: Most writers are shy, boring people who work in hidey-holes wearing old sweats day after day. Hardly anybody sends us to Paris.

What about you? Were you prepared for the realities of a writing career? What misconceptions did you have about writing? Anything to add to the list?

by Anne R. Allen (@annerallen) January 24, 2011
Anne R. Allen is the author of ten books, including the bestselling CAMILLA RANDALL MYSTERIES and HOW TO BE A WRITER IN THE E-AGE, co-written with NYT bestseller Catherine Ryan Hyde.

THE BEST REVENGE
30 weeks on Amazon's Humor Bestseller list!
Read how it all began!

The prequel to the Camilla Randall Mysteries.

We meet Camilla and Plantagenet in the big-hair, pastel-suited 1980s. In this satirical romp, a spoiled 1980s debutante comes of age—and discovers strengths nobody knew she had—when she loses everything. The story takes her from the doors of Studio 54 to the coke-fueled parties of Southern California to a cell in the L.A. County Jail accused of murder. We know she didn't do it, but who did? 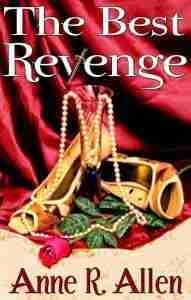 The Best Revenge is only 99c for one more week at all the Amazons, Smashwords, and Apple.