5 Reasons Authors Need Google Plus, Even though New Google Plus is Awful


First I have to say how jazzed I am to be named one of the 16 Best People to Follow on Twitter by book marketing guru Penny Sansevieri at Author Marketing Experts, Inc. Thanks Penny! It's a great list and I'm honored to be on it.

Okay, I know why you've been avoiding Google Plus. It's nerdy, slow, and the new version is clunky, chaotic, and scream-out-loud frustrating. New Google Plus hides access to the "about" link—the main reason most people would visit a page—so you can't find anybody's profile without a secret decoder ring.

People who visit your page in the new version see a random jumble of other people's photos. Google appears to want to create a chaotic mashup of Instagram and Pinterest for people with ADD and no desire to interact.

I asked people in my circles what they thought and got comments like this:

"Whenever they ask to change to the new one I decline—it's really poor."

"It doesn't seem they have a clue or want to build something that lasts."

"Have you tried to send feedback? It's like filling out a tax return."

"I persevered for a week before giving up. When you have a 'Google Page', there isn't an 'About' section AT ALL!"

Jonny Evans at Computer World said, "I’ve reverted back to using the old version. I’ll avoid using the new version for as long as I can… If they change permanently, I won't use it for social networking anymore."

Google Plus has also become diabolical about what photos they show. If you share a link to a web page, they will NOT display the featured image. They insist on taking the most obscure photo on the page.

For your book page at Amazon, that will be one of the "also boughts" which means the photo will inevitably be a competitor's title, not yours. When I post about a sale on How to Be a Writer in the E-Age, I always get the cover art for Kristen Lamb's Rise of the Machines. I love Kristen, and want to support her, but not at the expense of my own sales. I can only hope that she gets my cover art the same way.

Right now, you don't have to switch permanently to the new version, but I'm sure they'll force us all to do it one day soon. And the sadistic photo-switch happens in both versions.

So I understand why people resist it.

I heard lots of complaints about Google Plus even before the new version raised its ugly head. It's sooooo slooooow. And a lot of people tell me they simply don't want to feed the mega-tech companies that are controlling our lives. Google can act like a big bully.

But yes, you still want to be on Google Plus. Here's why:


1) Google Plus is Essential for Visibility


It turns out it's the single most important social medium for spreading the word about your books. Yeah. That surprised me too.

"One uses Google Plus because most people don't have a Wikipedia entry.

It is very hard to get Google to understand who you are in any exact manner, especially if other people have the same name and are more well-known than you. So, the more reputable profiles one has, and the more they are tied to other reputable platforms, and the more they mention that you are the author of X and Y books, which are set in Z place, the more virtuous things happen.

(The Hot Sheet is behind a paywall, but you can sign up for a free month. It's from long-time industry experts, Jane Friedman and Porter Anderson and full of the most up-to-the minute news in publishing.)

And why should we care about getting Google to understand who we are? Here's what publishing industry pundit Mike Shatzkin said in the "Shatzkin Files" in January:

"Approximately 25% of Amazon’s traffic originates as a Google search. One quarter. And Amazon is one of Google’s very largest advertisers.

Google also has an enormous impact on an author’s ability to be part of the merchandising process. Google Plus hasn’t turned out to be much of a social interaction platform, but an author’s profile there can have a big impact on how the author and his/her books rank for search...In short, Google Plus author pages are nearly as important as Amazon author pages, a fact totally independent of the traffic either of them gets."

GOOGLE PLUS PAGES ARE NEARLY AS IMPORTANT AS AMAZON AUTHOR PAGES.

And as for Apple—they don't even seem to have an internal search engine for iBooks. At least I can't find one. To find my own books there, I have to do a search for my title in Google and add "iTunes" after it.


One of your #1 goals as a writer, published or not, should be to get on the first page of search results in a Google Search.

Even if you're not yet worried about sales, if you're not published and planning to go the traditional route, remember that agents Google you when considering whether to represent your work. And if you're planning to self-publish, obviously it's even more important (see #1)

Posting to Google Plus is the fastest way to move up the search ladder. Last month, I started a new blog for my Camilla Randall mystery series. But I almost forgot the cardinal rule for new blogs: bookmark it, because it can take months to find a new blog in a Google search.

But luckily, when I wrote my first post there on January 1st, I shared it on Google Plus.

A few days later, a search for "Anne R. Allen's Books" brought up that Google Plus entry with the link to my new blog. It came up third in a Google search after my Amazon and Goodreads pages. (And above Google Play.)

It took less than a week instead of months or years. Just from one share on Google Plus. So I can confirm what these publishing experts are saying: the Google search engine gives priority to stuff posted on Google Plus.

3) Google Plus Hangouts are Free


Google Plus also still has their "hangout" feature, which allows virtual meetings with up to ten people absolutely free. Skype charges a fee for groups that size.

If you have Google Hangouts enabled, you can receive and make phone calls from your landline. Calls from anywhere to the U.S. and Canada are free. With Skype, you need to pay for a monthly subscription.

You can see a comparison of Google Hangouts vs. Skype by Kara Deyermenjian at Tech Target.

Do I used Google Hangouts? Nope. I'm old and allergic to cameras. But lots of authors use them to talk to book groups and readers.

4) Google is one of the Four Top Tech Giants


Mike Shatzkin says, "the environment today for marketing and delivering books is shaped by what Professor Scott Galloway of NYU Stern School of Business calls “The Four Horsemen”: Amazon, Apple, Facebook, and Google.

So Google Plus is as important to our marketing as Amazon and Facebook. (And I guess we all have to pay more attention to Apple, although they make me crazy with their Apple-devices-only exclusivity and lack of an internal search engine.)


Since I have a big Twitter presence, it makes me a little sad to write that. I love Twitter because I only have to spend a few minutes a day there and I can get a huge amount of information about what's going on in the industry.

Twitter has been plagued by widely circulated misinformation as well as what Topolsky calls "roving flocks of hateful, misogynistic, and well-organized 'Gamergate' communities that flooded people’s feeds with hate speech and threats." He said, "The company seemed to be wholly unprepared to handle mob violence, with few tools at its disposal to moderate or quell uprisings."

I've been a victim of some of that mob violence myself, so I get what he's saying. Lots of celebrities have been quitting Twitter recently because of the rampant hate and cruelty.

And of course Twitter has famously been used by terrorists, but as of this week, the Twitter police are working hard to shut out the bad guys.

But Twitter is definitely less cool than it was, and Topolsky adds that younger people are dropping it for Snapchat and Instagram and something called Peach. (No, I've never heard of it either, which is probably why kids like it.)

"We live in the Age of the Upgrade, and the generation raised on the Internet is the most fickle of brand champions: it loves something passionately, until it doesn’t. Then it moves on."


Nope. Not if they keep the new version. It's utterly useless for networking. And old Google Plus was
was more like LinkedIn—a business tool rather than a place to chat and share funny pictures and videos. I don't see it competing with the popular networking sites.

But this isn't terrible news for authors. It means all you have to do is put up a profile there and forget it, like Goodreads. You can use it to share your book launches and new blogposts and only stop in once a week or so.

If you want a little bigger presence there, you may want to join a group or two. Our Google Plus Group for Writers is pretty quiet, but we have some good info posted there a few times a week and it's a good place to get the answers to questions about tech or the industry. (NOTE: it is NOT a promotion site. Don't use it to advertise your books.)

But you can pretty much ignore the rest of Google Plus once you're there. Just make sure you ARE there. Obviously it's way more important than we thought!

At least right now. Here's another quote from Peter McCarthy's piece at The Hot Sheet.

"One day Google Plus will be a primary source, the next day it won't be, then again yes, then again sort of. Ditto Wikipedia. Ditto Twitter. The sources used will change every day. What doesn't change is that being in multiple major places with good, solid, consumer-friendly content is SEO. And SEO matters. Do it, or you may find yourself lost."

And as Porter Anderson says in the same piece, the bottom line is: "When people want something, they look for it. If you have it, get found."

Right now, the way to get yourself found is through a profile on Google Plus.

What about you, scriveners? Are you on Google Plus? Do you hate the new version? Do you think Twitter is fading? What do you think will take its place?

You can read more information on Google Plus from Johnny Base in the post he wrote for us in 2013. There's a link to a video he made telling you exactly how to join.

If you've been thinking of taking a look at my loopy, but oh-so-polite sleuth's misadventures with murder, mayhem and Mr.Wrong, here's a chance to read the first three cheap.more like LinkedIn—a business tool rather than a place to chat and share funny pictures and videos. I don't see it competing with the popular networking sites. 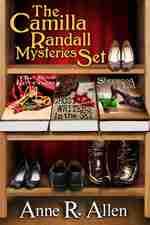 The Camilla Randall Mysteries Box set is on sale at all the Amazons.

You can also find it at

Snarky, delicious fun! The Camilla Randall mysteries are a laugh-out-loud mashup of romantic comedy, crime fiction, and satire: Dorothy Parker meets Dorothy L. Sayers. Perennially down-and-out socialite Camilla Randall is a magnet for murder, mayhem and Mr. Wrong, but she always solves the mystery in her quirky, but oh-so-polite way. Usually with more than a little help from her gay best friend, Plantagenet Smith.