What Did You Care About Most in 2014? Our Top Writing Stories.


As Anne and I looked back at the blog for the past year, a portrait emerged highlighting the themes and subjects that interested you most. We were intrigued by these clues about what was on our readers’ minds in 2014 and thought you’d be interested, too. So here are the topics that rang your bells.


As writers we care about how our readers respond so getting feedback is high on our lists. A series of three posts addressed this important issue from three different points of view:

The no-outline outline, the killer blurb and writing for the 21st Century

We've had such enthusiastic responses to our guest bloggers this year, we've invited some more great guests for 2015:

January: Agent Laurie McLean of Fuse Literary Agency on "Why You Don't Need a Literary Agent" (but why you might WANT one.)

This is an absolute MUST READ for anybody who is querying right now. Even though Laurie is closed to queries, SHE WILL ACCEPT QUERIES FROM READERS OF THIS BLOG.

Also in January: an interview with Walter Reuben, the winner of the L.A. Film Critics' Award for Best Indie Film for 2014. His film, The David Whiting Story, addresses the same mysterious Hollywood death as my novel The Gatsby Game. But what's most important is that a Boomer who followed his dream--and not the rules--achieved amazing success with a first film. Walter is an amazing inspiration to all new writers out there, no matter what their age.

February: Melodie Campbell, Canada's Queen of Comedy and president of Crime Writers of Canada will be back for another of her hilarious how-tos.

April: Robin Houghton, author of the great book Blogging for Writers with some Insider's Blogging Tips.

We also hope to have a visit from radio talk show host Dave Congalton with tips for authors on how to be a good radio guest.

We're also hoping to have some of our great guests from last year back again.

Coming up from Ruth: She's been researching the newest approaches to creativity and productivity and she's planning a post I know will help and inspire us all.

Coming up from Anne:


Both of us wish all of you great reviews and happy readers, sentences that flow and books to be proud of. We look forward to seeing you in 2015 and, until then, wish you the very best of New Years!

CHANEL and GATSBY: A Comic two-fer. Only 99c!
Hollywood and Manhattan: it's Bi-Coastal Comedy! 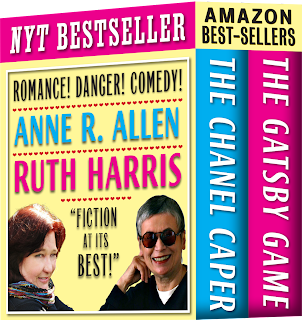 JAMES BOND MEETS NORA EPHRON. OR IS IT THE OTHER WAY AROUND?

Blake Weston is a smart, savvy, no BS, 56-year-old Nora Ephron-like New Yorker. Her DH, Ralph Marino, is a très James Bond ex-cop & head of security for a large international corporation. At a tense time in their relationship, Blake & Ralph are forced to work together to solve a murder in Shanghai & break up an international piracy ring.


A totally fabulous, LMAO adventure with some of the best one-liners I've ever read!!! Ruth's wit is just a hoot, and her characters have the best sassy mouths in the biz!!!...bestselling author D.D. Scott

A POSSIBLE SOLUTION TO A 40-YEAR OLD UNSOLVED HOLLYWOOD MYSTERY

When Nicky Conway meets Fitzgerald-quoting Alistair at a Princeton mixer, she falls for his retro, Jazz-Age charm. But she discovers he’s a con man obsessed with his own “Daisy”—British actress Delia Kent. After Alistair manipulates Nicky into nannying for Delia’s daughter on the set of a Hollywood film, Delia finds Alistair dead in her motel room. Local police can’t decide if it’s accident, suicide—or murder, in which case, Nicky is the prime suspect.


"For anyone who likes their books to be witty, with great characters, an atmosphere which it is a delight to experience, and a fast moving plot, this book is one you definitely shouldn't miss." ...Gerry McCullough of Gerry's Books

THE MEADOW NOVELLA PRIZE $15 ENTRY FEE. The winner of the contest will receive $500 and publication in the annual print edition of the journal. Submissions should be between 18,000 and 35,000 words.  Deadline February 1, 2015.

The M.M. Bennetts Prize for Historical fiction. $10 Entry fee. $500 prize for the best historical novel published in 2014. To be announced at the Historical Novel Society Conference in June in Deadline January 31st, 2015

THE GOVER PRIZE FOR SHORT-SHORT STORIES from Best New Writing. $5 Entry Fee. The prize is $250 and publication in Best New Writing to the best short fiction and creative nonfiction. Entries are limited to 500 words or less. Gover Prize winner and finalists will be published in the upcoming BNW edition. Deadline January 10th, 2015

Writers’ Village International Short Fiction Contest:  $24 entry fee. Prizes of $1600, $800, $400 and $80. A further ten Highly Commended entrants will receive a free entry in the next round. Professional feedback provided for all entries! Any genre: up to 3000 words. Deadline December 31st.